So having spent a week with the wonderfully hospitable Kit and Ar in their lovely new (and soon to be amazing!) flat in Buenos Aires – I’ve now donned a hastily purchased rucksack and set off for the Andes. Before I left we had a final night meal at the wonderful Lo De Charly  – which can only be described as a 24hr meat paradise. If the water starved people of the desert dream of a heaven of flowing rivers and fountains – then I can only presume vegetarians must dream of dying and going to Lo De Charly (or maybe I still don’t fully understand vegetarians). Anyway if you find yourself in that neck of the woods I can highly recommend it. Kit ordered the vacio – while Ar suggested the Entraña a cut not dissimilar to the French Onglet – and absolutely delicious. Served with the ubiquitous Argentinian Chimichurri sauce – a mix of oregano, olive oil, black pepper, red wine vinegar, chillies and fresh tomato – think a more aromatic and much less fiery version of the classic kebab shop chilli sauce – it was amazing. As a side note the mythology of Chimichurri sauce is that it owes it’s name to a nineteenth century Englishman. Assuming any vaguely spicy sauce was a curry – he asked his gaucho (Argentinean cowboy) hosts to pass the curry – they found this so hilarious the name stuck – if in a slightly mispronounced form!

Buenos Aires is an amazing city – and huge. Really huge. As a Londoner it doesn’t feel small – in that way that pretty much every european capital city, and even New York, has a tendency to. Flying in looking out over the city it was like the intro to the new Judge Dredd movie looking out over Mega City One. A mass of grids spanning from horizon to horizon occasionally rising to a peaked cluster of sky scrapers which form jagged punctuation marks amid the scale of the city. It’s also down at heel. In fact in some places there’s pretty much no heel left. Though with the exception of the old town it’s less crumbling colonial spanish and more crumbling 60’s concrete. It would appear the argentines were overtaken with the same 60’s curse that saw the grandeur of the old Euston Station pulled down and replaced by the current concrete monstrosity. Though ironically – for 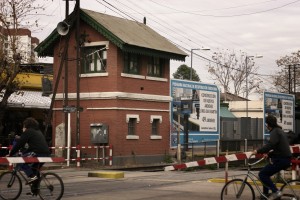 beautiful displays of edwardian British railway architecture you can’t go much better – from the duck board rimmed signal boxes straight off a 30’s LMS railway layout – to the raised platforms, iron bridges and stations that wouldn’t look out of place in suburban north London, the railways really are a monument to the British Engineers who built them. They even still run on the left. Sure some would argue that no matter how good British engineering is you still should probably have modernised them at some point in the last 100 years… but who am I to quibble? Seeing a proper old british drop arm semaphore signal still in use is pretty cool.

But all good things must come to an end – so I boarded my bus to the Andes yesterday morning. If anyone else grew up watching The Amazing Cities of Gold… you’ll get the picture though in my case it has involved slightly less quixotic anime adventure and slightly more 23hr bus rides. So my first stop is the city of Salta a trifling 1,552m above sea level. Why you may ask would a train nerd such as myself spend 23hrs on a bus… well so I can get on board the Tren a las Nubes (Train to the Clowds) 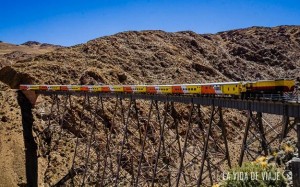 which it turns out you can’t actually get to by train from Buenos Aires because the state in it’s ultimate wisdom privatised the extensive Argentine rail network in the early 90’s and guess what… they ‘rationalised’ the service by, well, stopping providing a service. Apparently some government officials were surprised – presumably the same officials who just commissioned that report into what bears do in the woods. Fortunately though, us tourists with our pockets full of yankee dollars, can still get on a train. And not just any old train… oh no this train reaches a staggering 4,200 meters above sea level, has 29 bridges, 21 tunnels, 13 viaducts, it’s own medical bay to offer oxygen to the passengers who are actively encouraged to chew coca leaves. Yep surely if it involves drugs it can’t be that nerdy? (I will make sure to take a serial number for the loco, which I believe is a EMD GT22 Series.. but I digress). Anyway it’s pretty cool. And pretty high.
Right – it’s now 8pm which is just about time for an (early) dinner in Argentinian terms. Looks like it’s time to go and explore Salta city.