You are here: Home / Archives for Places / UK / Channel Islands 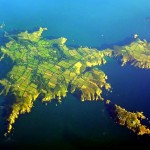 Northumberland is looking to secure status as a dark skies park, but what is the night sky like when it is really dark? I’ve never been to one of the international dark skies parks, but I have been to Sark, which was named the world’s first dark skies island in 2011. Even by day, the Channel Island is known as a world to itself: the island has no public street lighting, … END_OF_DOCUMENT_TOKEN_TO_BE_REPLACED