The best places to get a pint, glass of wine or classy cocktail – as recommended by comedians… 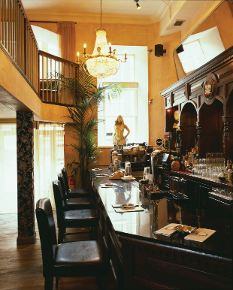 Sure, if you know your whiskies, this is hog heaven. But you can know nothing and are not made to feel stupid by the enthusiastic, friendly and knowledgeable staff. You can say, ‘well I had Bowmore once’, and they won’t say, ‘who hasn’t, you English twat’. Instead, they’ll suggest you try Bowmore’s 25 year old, where they only made 500 barrels.

Then they’ll go, okay, so that’s an Islay whisky, let’s follow the coast road that distillery is on to another more boutique distillery, and try theirs. And then maybe go upstream inland to the next one and try their 30 year old that was made in 50 old sherry barrels imported from Jerez. Soon you’ll be savoring unique whiskies, called Baby-faced Arsonist, Doctors’ Surgeries and Flower Shops, and Gunpowder Treason and Plot. Markus Birdman

Decked out with seventies TVs, vinyl trays, porcelain tigers and fully-functional hand dryers, it is dead jazzy. They have also put a bar in it. I presume they have to. It’s marble, if you’re interested. With a little crook, two thirds of the way down. That little crook is my favourite place in Edinburgh. Quite possibly, anywhere. I have had more fun and adventures and stories there than anywhere. None of which I care to share here—my mum might be reading this. (Hi Mum.) And whilst it’s quite the commute from London, I do travel up there for a daiquiri whenever I can… Tom Webb

My favourite place in Edinburgh is a tiny, not-very-well-advertised members’ club on Dublin Street called the Dublin Street Irregulars. It is in a cellar which only seems to have two seats and a large rack of wine. The wine is free, which is better than the other clubs who seem to charge. I believe the membership list was fixed at six people some time in the reign of the old Queen and has never expanded, which means there’s always a very good chance of getting a seat: one in three (six members, two seats). Sir Tim Fitzhigham

The Auld Hoose on St Leonard’s Street has become a haven for the Betas over the years. A friendly goth pub (aren’t they all?) with a rotating selection of real ales and a whisky menu to make a grown man weep. We first stumbled through the doors of this tattooed Shangri-La as it was the nearest pub to our flat. Since then it has become a regular haunt. A place to celebrate, to commiserate, to order a plate of nachos so big that the teetering mound of delicious fresh and cheese stretches almost to the ceiling. The Beta Males

This pub has it all: great atmosphere, great people, the walls and ceiling has so much naval history and bits and bobs from all over the world hanging off it or stuck to it, and the drinks are reasonably priced, not £4 that most venues charge nowadays for a pint. So yes, check this place out! Jim Jefferies

It is a joy to have somewhere relaxed, chilled and cool-without-being-pretentious to go to, and ‘Under The Stairs’ is my choice.You sneak in the back door of what I thought was the kitchen (which upset the manager when I asked where the main door was) and are greeted by soft armchairs, an array of fine foods, and a sense of peace that is rarely found in an Edinburgh pub but that slowly fades away into a pleasantly raucous evening… Keith Farnan

I come here to watch the Aussie Rules, play pool and basically chill out before I have to go onstage. It’s really close to everything and always reminds me of home. Jim Jefferies