The best views around Edinburgh – as recommended by comedians… 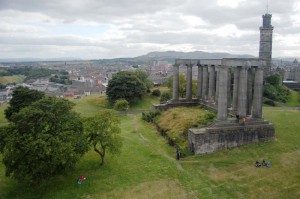 The secret is to go up there before sunrise, which is early, but you are more than likely to be up there alone. When the sun finally rises you will have a great view of the city and the lake (or loch!) It can be quite cold up there at that time so bring a jacket. If you choose to go up there in afternoon you will see other tourists, but it’s relatively spacious and it is easy enough to get a bit of grass to sit on. I’d bring a tarp as the grass is likely to be wet. Dana Alexander

At least once a week during the festival I climb Arthur’s Seat either alone or I take people up there too. But climb up to the top and then down the south side, away from the city and you come down into Duddingston Village, which is nestled in the valley and completely hidden from the city. It’s a cobbled street village and in the heart of the village is one of the oldest pubs in Scotland, called The Sheep Heid Inn. Once you’ve climbed over the hill and got there you can sit in leather armchairs and simply get away from the world. Andrew Maxwell

Behind Marchmont Road, out past the Meadows at the south side of Edinburgh, where I stay when I am at the festival, there’s a hill with the Royal Observatory at the top. It’s less well known than Arthur’s Seat, but it is always quieter. Sometimes I try to run up it; most times I just walk to the top. It is where I head of an afternoon to clear my head and detach myself from the festival. I have a sit and watch the city, knowing all the madness is going on below—but not being able to hear anything but the wind rushing in from the Firth is a hugely relaxing feeling. Dan Alexander

Calton Hill is only a four-minute walk away from the corner of Princes Street, and only about fify steps to reach the top. So unlike Arthur’s Seat, you can pop up there for a quickie at a moment’s notice. It is also littered with bizarre 18th-century monuments to sit on, including a cannon, an observatory that looks like a telescope and three enormous, useless walls with pillars that were supposed to become a temple before they ran out of money. It gives the place a wonderful air of pointlessness. Jay Foreman

My favourite time to come here is 5am to watch the sunrise over Leith from the forgotten National Monument: the Acropolis. This Victorian neoclassical façade is part of a building that was never finished and sits fenced off amidst a tangle of nettles and buddleias. It doesn’t match the rugged beauty of Arthur’s Seat, but there’s a dynamic feel to the nature here. It’s fighting back! Charlie Partridge