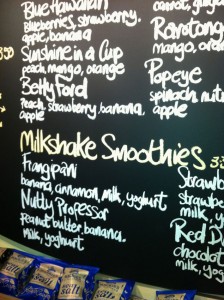 It’s all veggie, but you would hardly notice. Their portions are f-off massive, so even a meat-eating ‘I don’t cry, I’m not a woman’ beefcake will leave with his belly satisfied and balls intact. Their chilli will knock your orthopedic sandals off. I personally recommend going healthy and adding avocado, but you can also do an old school butter, beans and cheese. Aisling Bea

The range is bewildering so normally I stick to old favourites: fish, chips and beer. Better than fish and chips, to the tune of beer. That’s a balanced lunch, let alone a snack. Chips with cheese and gravy. Sounds simple. Could anybody make it? I’m not sure. The simplest ingredients transcend to a higher level when nuanced by experts in their field. Richard Vranch

During my first Edinburgh I did a package show with a few other comics, including Tom Rosenthal, to whom I am eternally grateful for introducing me to the Pie Maker. He would come in nearly every day with a pie for breakfast, which I thought was just plain weird until one day I was so curious to see what the big deal was that I had one too and became a pie-for-breakfast man myself. Rob Beckett

it seems to do pretty much everything and anything. You could probably ask for a manatee burger and they would at least point you in the right direction. Colin Hoult

Mae Martin recommended Hula to me as she said the staff were great: she fancied one of the waitresses and said another looked like a white Rihanna. As a result, she spent thousands there over the course of the month. Make sure you ask for extra carrot and spinach if they have it, one of those organic immune booster shots, extra multi-vitamins (what does that even mean?), antioxidants and anything else they have that doesn’t taste very nice. Amy Hoggart