You are here: Home / Features / Finding the world’s shortest flight… in the Orkney Islands 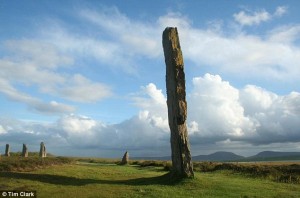 It was a valiant effort, but the man walking back to his car was losing his battle against the elements.
Lashed with the full force of the tempestuous Scottish weather, much of the contents of his Styrofoam cup had already been scattered on the ground while the breeze was also beginning to loosen his grip on the bacon bap he was holding.
And yet his smile was deceiving. It suggested that he was strolling along the seafront in the French Riviera, not enduring a summer washout on the tip of the Orkney Islands.

The British seem uniquely predisposed to finding, and then watching, bad weather – usually in cars. If the small collection of vehicles which had gathered at the same spot was anything to go by, then a precipice at Birsay, on the northern tip of Orkney’s main island was the biggest tourist draw in the area.

In front of us the tiny tidal island of Brough Head was being buffeted by the rising swell – pounding waves creating arcs of spray in a continuous motion. Occasionally a father with a skewed sense of humour would send his son out of their car and into the rain to see what was written on the visitor information board.

In front of us the tiny tidal island of Brough Head was being buffeted by the rising swell – pounding waves creating arcs of spray in a continuous motion. Occasionally a father with a skewed sense of humour would send his son out of their car and into the rain to see what was written on the visitor information board.

History shows that we’re not the first to see the appeal. This spit of land has, over the centuries, been a centre for Viking power, an ancient capital of the Orkney Islands, the site of the northernmost cathedral in the British Isles – and now, home to the ruins of a royal palace.

Nor does the archipelago’s appeal stop at Birsay. The Orkney islands succeed in surprising you at every turn. Whether it is Europe’s oldest communal settlement – the 5000-year-old Neolithic remains of Scara Brae – or the scuttling of the German naval fleet after the First World War, the Islands are brimming with tales of piracy, smuggling, ancient spiritual sites and high drama on the High Seas.

Though getting to the Islands may sound like a daunting prospect, the growing number of cheap flights connecting the disparate parts of the UK made the trip surprisingly hassle-free.

We flew with Flybe and Loganair, the latter of which has daily connections to the Orkneys from Edinburgh, Glasgow, Dundee and Aberdeen airports. Visitors who are keen on a less jet-set pace could also opt to take one of the growing number of British Isles cruises which visit the Orkney and Shetland Islands as well as Scotland’s other coastal marvels.
Most visitors to the Orkneys find time to visit the Island’s most famous attraction, Scara Brae. Older than Ancient Greece, Stonehenge and even the Pyramids, the Neolithic settlement was discovered after a storm in 1850 swept the top off a sand dune which had covered the site for over five millennia.

The tiny collection of houses sunk into the earth are among the earliest known collections of dwellings in the world, and are still incredibly well preserved.

They even include the original stone beds, shelves and a stone-age ‘dresser’ in each house, which proves, if anything, that the tradition of keeping up with the Jones has persisted since ancient times.

Accommodation has (luckily) moved with the times, and the Islands now offer a range of places to stay, from small cottage lets to spa hotels and B&Bs.

We stayed at the Kirkwall Hotel, which hosts a welcoming restaurant with a hearty range of meals – including an especially tempting steak-and-ale pie that was the perfect belly-filler after a day exploring marshes and ruins.
Though Scara Brae is a managed ancient site, many other relics of the past can be found simply by the side of the road, are open day and night, and are free to enter.

The standing stones of Stenness and the Ring of Brodgar, which is akin to the stone ring at Avebury in Wiltshire, are particularly fascinating. Believed to be a lunar calendar much like Stonehenge, the centre of the circle has never been excavated.

Our last task before heading back south was to help deliver the post. Sitting in a four-seater fixed wing aircraft with Simon the pilot, we were due to head to the northern-most island in the Orkney chain, Westray, and its sister Island, Papa Westray.

Little over four miles long and one mile wide, Papa Westray has been hailed by Bill Bryson as his favourite place in Britain. The island is home to just over 70 people, and almost as many archaeological sites (60 at last count).
There are no departure lounges here – a field gate is considered a customs barrier – and yet even on the very fringe of Britain this airfield manages to find itself in the annals of history.

Lasting a little over 90 seconds, the inter-island service from Westray to Papa Westray holds the record for the shortest scheduled flight anywhere on the planet.

There really was nothing to it, other than trotting down a short runway and across the open water. I had just enough time to wave to a languid seal sunbathing below before we were within touching distance of another rural landing strip.
Our own stay on Westray lasted little over five minutes, and involved helping to pass over the latest letters and parcels from the mainland before heading off again in our unique delivery van, climbing by propeller-power back, over the sun-baked seals, to the more well-trodden parts of the British Isles.

My fleeting visit to the Orkneys lasted just over 36 hours, but the Islands made a lasting impression.
They might be nestled in near solitude at the tip of the British Isles, but if you’re willing to take a look, you’ll find they hold enough charm to truly capture the imagination. If you get the chance to join that cluster of cars watching the spray buffeting Brough Head, you really should grab it.